Check out the 'Deals on Demand' category and get digital certificates delivered right to your phone!

Starting with a tiny Root Beer stand in California, A&W grew into the nation’s first franchise restaurant chain. Along the way it popularized drive-in restaurants and made Root Beer Floats a nationwide – and international – treat. Even Marriott hotels traces its roots to A&W. One hundred years of history is, well, a lot of history. But here’s a good start.
1) A&W was founded on June 20, 1919 in Lodi, California, with the first mug of Root Beer served at a homecoming parade for World War I veterans.
2) A&W Restaurants is older than sliced bread (1919 vs. 1928).
3) A&W invented the Original Bacon Cheeseburger in 1963.
4) A&W introduced Rooty the Great Root Bear as its mascot in 1973.
5) A&W Restaurants manufactured 150,000 glass mugs for 2019, saving approximately 180 paper cups per mug.
6) A&W Restaurants has raised over $800,000 for veterans-related charities since 2014.
7) California is home to the most A&W Restaurants with approximately 70 locations.

a. 2nd most: Wisconsin (approximately 50 locations)

b. 3rd most: Michigan (approximately 40 locations)

Certificate to be used toward food & drink only, A&W Albany and Richmond, 1 certificate per purchase/family, no cash back, all sales final, no refunds or exchanges, no carry over, not responsible for lost/stolen certificates. 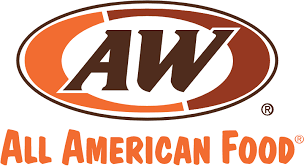